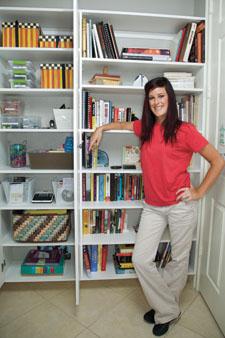 Organizer happiest when helping others find their space

You can’t go to Italy and not feel something.

For Tracy Colleran, it came on the Isle of Capri in 2007 during the first real vacation she had ever taken – the first time she had ever been outside the United States. Some barefoot fishermen took her in a boat to the Blue Grotto, a sea cave that is flooded with a brilliant emerald light created by sunlight passing through an underwater cavity. As they sang vibrantly and passionately, she had an epiphany.

“It was the first time I could really sit back and think, ‘What am I really good at? What can I help people with? What can I make a living off of?’ ” she says. “It wasn’t so much, ‘How much money can I make and how can I get there the fastest?’ It was genuinely, ‘What is my passion?’ And that word – passion – is a huge thing in Italy. Everyone’s passionate.”

Colleran, 31, hadn’t really figured out what she wanted to do after graduating from FGCU in 2005 with a marketing degree, so she was doing sales and marketing for a home-based electronics company. Her boss’s disorganization had started to affect her commissions, so she redid his office, including a new filing and bill-paying system.

The Italy epiphany gave her the belief that she could do that for others as well. She had already researched the National Association of Professional Organizers. When she got back from Italy, she gave her employer two-weeks’ notice and used an inheritance from her grandfather to start Straighten Up, Inc., a home and office organizing business.

The biggest challenge, ironically for a marketing major, was advertising, because she found that networking was much more important in establishing her name in this field. The next challenge was educating people so they understood that she was not a housekeeper. The final challenge was to foster a relationship whereby people trusted her in their homes and offices.

She has a passion to help circumstantially and chronically disorganized individuals feel more in control of their surroundings.

“I love helping people,” she says. “I work very specifically in the mental aspect of it. I want to work with people who had really traumatic things happen to them and their life is completely overwhelmed. I found a niche with mental addiction and health. I work with people who had life changes, whether they’ve moved or had a death in the family and their life is in chaos. It gives me a lot of personal satisfaction.”